Chief Instructor Sue Chang – Get influence from her father Zhang Zengrong from childhood onward be trained by Master Sun, Master Wang Ruizhi, disciple of Chen Fake, and kept on practice as hobby to today.

TCFA Chen Style of Tai Chi chased back from history originally from the 17th Generation Chen Fake (1928-1957).  Chen Fake due to its outstanding Tai Chi skills is named “Tai Chi No. 1 太极第一人”.  Chen Fake came to Beijing from Chen Jiagou (his hometown in Hanan province) developed in Beijing.  From then on Tai Chi stepped out of countryside to capital city of Beijing and the world.

Chen Fake pioneered a new era of Chen-style Taijiquan and became the second Milestone in the history of the development of Taijiquan.

Chen Fake started his study and practise since childhood, he put great efforts in his training, and mastered the technical skills of its system of Chen style Taijiquan in a comprehensive way and becoming an outstanding educator and training in the martial art history.

In 1928, he was invited to Pei Ping City (used to be called Peking, now is Beijing) training the art, from then on Chen Style Taijiquan quickly spread in the society, laid the foundation for its all-round development, and made great contributions to the development of Taijiquan. 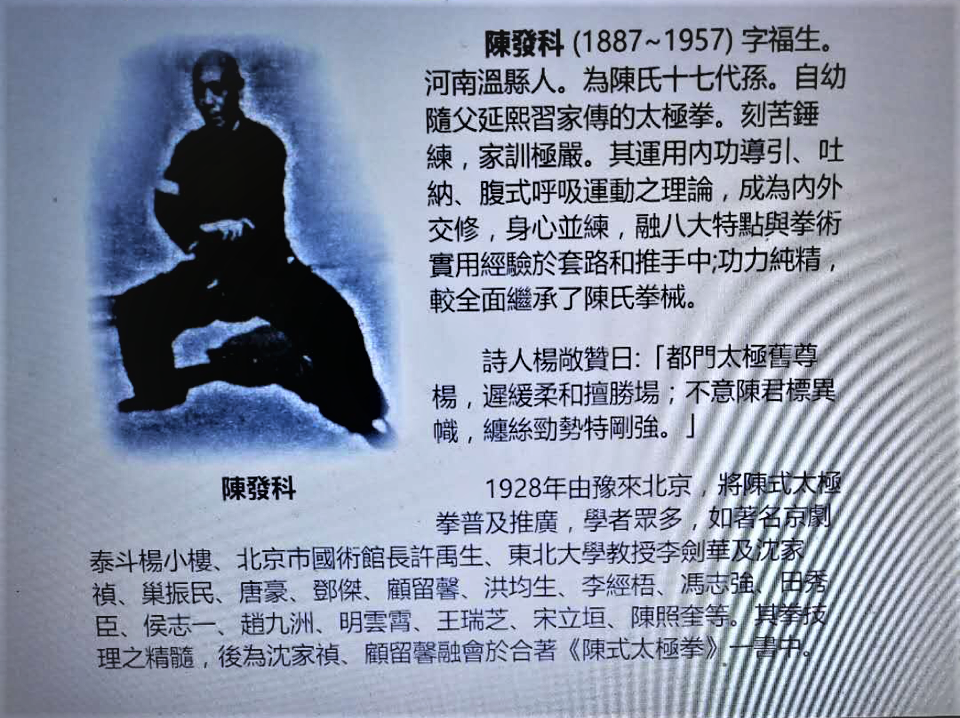 Let us remember them for their life time contributions to Tai Chi for the harmony of the world peace, human‘s wellbeing!

Master Wang’s training and his spirit always be remembered and be encouraged all of us with discipline: “No matter what, we must attend his training early in the morning 5-7am day by day. “  At the time in 1980th we lived in the Dongzhimen Shizipo Xili Eastern Suburbs of Beijing.   Master Wang Ruizhi is always there every day, all year around no matter summer or winter.

Master Wang Ruizhi paddled a bicycle from his home Ciqikou瓷器口, all the way to Workers Stadium East Gate of Beijing in Dong Zhimen, regardless of the weather rain or shine, snowing or windy all seasons through the years.  It took him around 40 minutes to an hour to the training venue.  It trained us be with nature, get up with nature, and it is amazed that after Tai Chi we were all full of the energy with the whole day around.

We also took part in Tai Chi perform demonstration events organized by the organization named:  Chen style Tai Chi Research Organization.   Master Feng Zhiqiang was the organizer for most of the event at the time.  Students were selected to attend those functions from the Masters who were disciples of Chen Fake from 13 locations in Beijing.  All the masters teaching with their heart with Tai Chi disciplines and have the highly respective spirit wishing us to in heritage the skills for the next generation.

Master Wang Ruizhi often taught us very strictly, seriously, correct us for each step, each movement, again and again with great patient till we perform correctly.  He is very patient with his calmness teaching us in details, and required us practicing whenever we can.   He is able to sense the flow when we practicing hand push, or martial art application.   He said:  Without knowing the reason of the application you never be able to get the Tai Chi skills.

Master Wang told me:  “Practice Tai Chi benefit all your life” Sue recalled.  Master Wang often say:   “Master Tai Chi skills, 1st of all, you have to become a Tai Chi person.  You need to follow the disciplines of Tai Chi, learning from foundation step by step as how do we breathing in a regulation bases.  Being kind from your heart, not only get the skills yourself, but benefit more people.”

After I started teaching Tai Chi since 2000, I gradually understood further “what Tai Chi person is “Once I am given myself to the nature, aligning with nature, be as part of the nature, Tai Chi make me happier, stronger and healthier, feeling so blessed and more appreciated.   Whenever I am practicing Tai Chi, it purifies my spirit with calmness in harmony balanced condition, I am feeling I am having a new life day by day.

Tai Chi also helped me overcome many lifetime crises.   Thanks my Master Wang Ruizhi every morning there for us, taught us in details with his heart.